There are several steps to creating a useful model, including parameter estimation, model selection and tuning, and performance assessment. At the start of a new project, there is usually an initial finite pool of data available for all these tasks, which we can think of as an available data budget. How should the data be applied to different steps or tasks? The idea of data spending is an important first consideration when modeling, especially as it relates to empirical validation.

When data are reused for multiple tasks, instead of carefully “spent” from the finite data budget, certain risks increase, such as the risk of accentuating bias or compounding effects from methodological errors.

When there are copious amounts of data available, a smart strategy is to allocate specific subsets of data for different tasks, as opposed to allocating the largest possible amount (or even all) to the model parameter estimation only. For example, one possible strategy (when both data and predictors are abundant) is to spend a specific subset of data to determine which predictors are informative, before considering parameter estimation at all. If the initial pool of data available is not huge, there will be some overlap in how and when our data is “spent” or allocated, and a solid methodology for data spending is important.

This chapter demonstrates the basics of splitting (i.e., creating a data budget) for our initial pool of samples for different purposes.

The primary approach for empirical model validation is to split the existing pool of data into two distinct sets, the training set and the test set. One portion of the data is used to develop and optimize the model. This training set is usually the majority of the data. These data are a sandbox for model building where different models can be fit, feature engineering strategies are investigated, and so on. As modeling practitioners, we spend the vast majority of the modeling process using the training set as the substrate to develop the model.

The other portion of the data is placed into the test set. This is held in reserve until one or two models are chosen as the methods most likely to succeed. The test set is then used as the final arbiter to determine the efficacy of the model. It is critical to look at the test set only once; otherwise, it becomes part of the modeling process.

How should we conduct this split of the data? The answer depends on the context.

Suppose we allocate 80% of the data to the training set and the remaining 20% for testing. The most common method is to use simple random sampling. The rsample package has tools for making data splits such as this; the function initial_split() was created for this purpose. It takes the data frame as an argument as well as the proportion to be placed into training. Using the data frame produced by the code snippet from the summary in Section 4.2 that prepared the Ames data set:

The object ames_split is an rsplit object and contains only the partitioning information; to get the resulting data sets, we apply two more functions:

These objects are data frames with the same columns as the original data but only the appropriate rows for each set.

Simple random sampling is appropriate in many cases but there are exceptions. When there is a dramatic class imbalance in classification problems, one class occurs much less frequently than another. Using a simple random sample may haphazardly allocate these infrequent samples disproportionately into the training or test set. To avoid this, stratified sampling can be used. The training/test split is conducted separately within each class and then these subsamples are combined into the overall training and test set. For regression problems, the outcome data can be artificially binned into quartiles and then stratified sampling can be conducted four separate times. This is an effective method for keeping the distributions of the outcome similar between the training and test set. The distribution of the sale price outcome for the Ames housing data is shown in Figure 5.1. 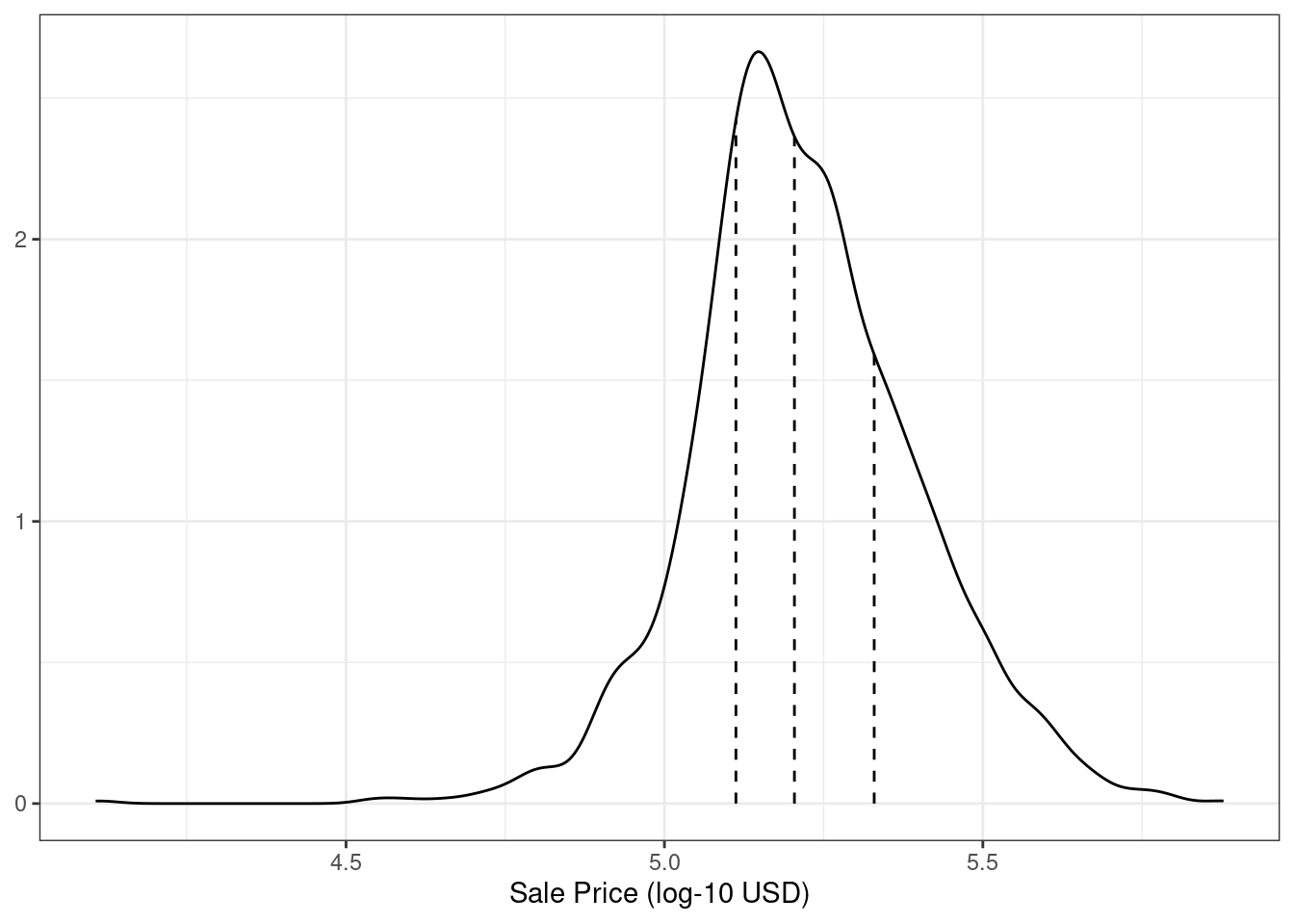 Figure 5.1: The distribution of the sale price (in log units) for the Ames housing data. The vertical lines indicate the quartiles of the data

As discussed in Chapter 4, the sale price distribution is right-skewed, with proportionally more inexpensive houses than expensive houses on either side of the center of the distribution. The worry here with simple splitting is that the more expensive houses would not be well represented in the training set; this would increase the risk that our model would be ineffective at predicting the price for such properties. The dotted vertical lines in Figure 5.1 indicate the four quartiles for these data. A stratified random sample would conduct the 80/20 split within each of these data subsets and then pool the results. In rsample, this is achieved using the strata argument:

Only a single column can be used for stratification.

There is very little downside to using stratified sampling.

Are there situations when random sampling is not the best choice? One case is when the data have a significant time component, such as time series data. Here, it is more common to use the most recent data as the test set. The rsample package contains a function called initial_time_split() that is very similar to initial_split(). Instead of using random sampling, the prop argument denotes what proportion of the first part of the data should be used as the training set; the function assumes that the data have been pre-sorted in an appropriate order.

The proportion of data that should be allocated for splitting is highly dependent on the context of the problem at hand. Too little data in the training set hampers the model’s ability to find appropriate parameter estimates. Conversely, too little data in the test set lowers the quality of the performance estimates. Parts of the statistics community eschew test sets in general because they believe all of the data should be used for parameter estimation. While there is merit to this argument, it is good modeling practice to have an unbiased set of observations as the final arbiter of model quality. A test set should be avoided only when the data are pathologically small.

5.2 What About a Validation Set?

When describing the goals of data splitting, we singled out the test set as the data that should be used to properly evaluate of model performance on the final model(s). This begs the question: “How can we tell what is best if we don’t measure performance until the test set?”

It is common to hear about validation sets as an answer to this question, especially in the neural network and deep learning literature. During the early days of neural networks, researchers realized that measuring performance by re-predicting the training set samples led to results that were overly optimistic (significantly, unrealistically so). This led to models that overfit, meaning that they performed very well on the training set but poorly on the test set.12 To combat this issue, a small validation set of data were held back and used to measure performance as the network was trained. Once the validation set error rate began to rise, the training would be halted. In other words, the validation set was a means to get a rough sense of how well the model performed prior to the test set.

Whether validation sets are a subset of the training set or a third allocation in the initial split of the data largely comes down to semantics.

Validation sets are discussed more in Section 10.2.2 as a special case of resampling methods that are used on the training set.

With the Ames housing data, a property is considered to be the independent experimental unit. It is safe to assume that, statistically, the data from a property are independent of other properties. For other applications, that is not always the case:

Chapter 9 of M. Kuhn and Johnson (2020) contains other examples.

5.4 Other Considerations for a Data Budget

When deciding how to spend the data available to you, keep a few more things in mind. First, it is critical to quarantine the test set from any model building activities. As you read this book, notice which data are exposed to the model at any given time.

The problem of information leakage occurs when data outside of the training set are used in the modeling process.

For example, in a machine learning competition, the test set data might be provided without the true outcome values so that the model can be scored and ranked. One potential method for improving the score might be to fit the model using the training set points that are most similar to the test set values. While the test set isn’t directly used to fit the model, it still has a heavy influence. In general, this technique is highly problematic since it reduces the generalization error of the model to optimize performance on a specific data set. There are more subtle ways that the test set data can be used during training. Keeping the training data in a separate data frame from the test set is one small check to make sure that information leakage does not occur by accident.

Second, techniques to subsample the training set can mitigate specific issues (e.g., class imbalances). This is a valid and common technique that deliberately results in the training set data diverging from the population from which the data were drawn. It is critical that the test set continues to mirror what the model would encounter in the wild. In other words, the test set should always resemble new data that will be given to the model.

Next, at the beginning of this chapter, we warned about using the same data for different tasks. Chapter 10 will discuss solid, data-driven methodologies for data usage that will reduce the risks related to bias, overfitting, and other issues. Many of these methods apply the data-splitting tools introduced in this chapter.

Finally, the considerations in this chapter apply to developing and choosing a reliable model, the main topic of this book. When training a final chosen model for production, after ascertaining the expected performance on new data, practitioners often use all available data for better parameter estimation.

Data splitting is the fundamental strategy for empirical validation of models. Even in the era of unrestrained data collection, a typical modeling project has a limited amount of appropriate data, and wise spending of a project’s data is necessary. In this chapter, we discussed several strategies for partitioning the data into distinct groups for modeling and evaluation.

At this checkpoint, the important code snippets for preparing and splitting are: