For statistical modeling in R, the preferred representation for categorical or nominal data is a factor, which is a variable that can take on a limited number of different values; internally, factors are stored as a vector of integer values together with a set of text labels.33 In Section 8.4.1 we introduced feature engineering approaches to encode or transform qualitative or nominal data into a representation better suited for most model algorithms. We discussed how to transform a categorical variable, such as the Bldg_Type in our Ames housing data (with levels OneFam, TwoFmCon, Duplex, Twnhs, and TwnhsE), to a set of dummy or indicator variables like those shown in Table 17.1.

Many model implementations require such a transformation to a numeric representation for categorical data.

Appendix A presents a table of recommended preprocessing techniques for different models; notice how many of the models in the table require a numeric encoding for all predictors.

However, for some realistic data sets, straightforward dummy variables are not a good fit. This often happens because there are too many categories or there are new categories at prediction time. In this chapter, we discuss more sophisticated options for encoding categorical predictors that address these issues. These options are available as tidymodels recipe steps in the embed and textrecipes packages.

17.1 Is an Encoding Necessary?

A minority of models, such as those based on trees or rules, can handle categorical data natively and do not require encoding or transformation of these kinds of features. A tree-based model can natively partition a variable like Bldg_Type into groups of factor levels, perhaps OneFam alone in one group and Duplex and Twnhs together in another group. Naive Bayes models are another example where the structure of the model can deal with categorical variables natively; distributions are computed within each level, for example, for all the different kinds of Bldg_Type in the data set.

These models that can handle categorical features natively can also deal with numeric, continuous features, making the transformation or encoding of such variables optional. Does this help in some way, perhaps with model performance or time to train models? Typically no, as Section 5.7 of M. Kuhn and Johnson (2020) shows using benchmark data sets with untransformed factor variables compared with transformed dummy variables for those same features. In short, using dummy encodings did not typically result in better model performance but often required more time to train the models.

We advise starting with untransformed categorical variables when a model allows it; note that more complex encodings often do not result in better performance for such models.

Sometimes qualitative columns can be ordered, such as “low,” “medium,” and “high”. In base R, the default encoding strategy is to make new numeric columns that are polynomial expansions of the data. For columns that have five ordinal values, like the example shown in Table 17.2, the factor column is replaced with columns for linear, quadratic, cubic, and quartic terms:

While this is not unreasonable, it is not an approach that people tend to find useful. For example, an 11-degree polynomial is probably not the most effective way of encoding an ordinal factor for the months of the year. Instead, consider trying recipe steps related to ordered factors, such as step_unorder(), to convert to regular factors, and step_ordinalscore(), which maps specific numeric values to each factor level.

17.3 Using the Outcome for Encoding Predictors

There are multiple options for encodings more complex than dummy or indicator variables. One method called effect or likelihood encodings replaces the original categorical variables with a single numeric column that measures the effect of those data (Micci-Barreca 2001; Zumel and Mount 2019). For example, for the neighborhood predictor in the Ames housing data, we can compute the mean or median sale price for each neighborhood (as shown in Figure 17.1) and substitute these means for the original data values:

Figure 17.1: Mean home price for neighborhoods in the Ames training set, which can be used as an effect encoding for this categorical variable

As detailed in Section 16.4, we can prep() our recipe to fit or estimate parameters for the preprocessing transformations using training data. We can then tidy() this prepared recipe to see the results:

When we use the newly encoded Neighborhood numeric variable created via this method, we substitute the original level (such as "North_Ames") with the estimate for Sale_Price from the GLM.

Effect encoding methods like this one can also seamlessly handle situations where a novel factor level is encountered in the data. This value is the predicted price from the GLM when we don’t have any specific neighborhood information:

Effect encodings can be powerful but should be used with care. The effects should be computed from the training set, after data splitting. This type of supervised preprocessing should be rigorously resampled to avoid overfitting (see Chapter 10).

When you create an effect encoding for your categorical variable, you are effectively layering a mini-model inside your actual model. The possibility of overfitting with effect encodings is a representative example for why feature engineering must be considered part of the model process, as described in Chapter 7, and why feature engineering must be estimated together with model parameters inside resampling.

Creating an effect encoding with step_lencode_glm() estimates the effect separately for each factor level (in this example, neighborhood). However, some of these neighborhoods have many houses in them, and some have only a few. There is much more uncertainty in our measurement of price for the single training set home in the Landmark neighborhood than the 354 training set homes in North Ames. We can use partial pooling to adjust these estimates so that levels with small sample sizes are shrunken toward the overall mean. The effects for each level are modeled all at once using a mixed or hierarchical generalized linear model:

Let’s prep() and tidy() this recipe to see the results:

New levels are then encoded at close to the same value as with the GLM:

You can use a fully Bayesian hierarchical model for the effects in the same way with step_lencode_bayes().

Let’s visually compare the effects using partial pooling vs. no pooling in Figure 17.2: 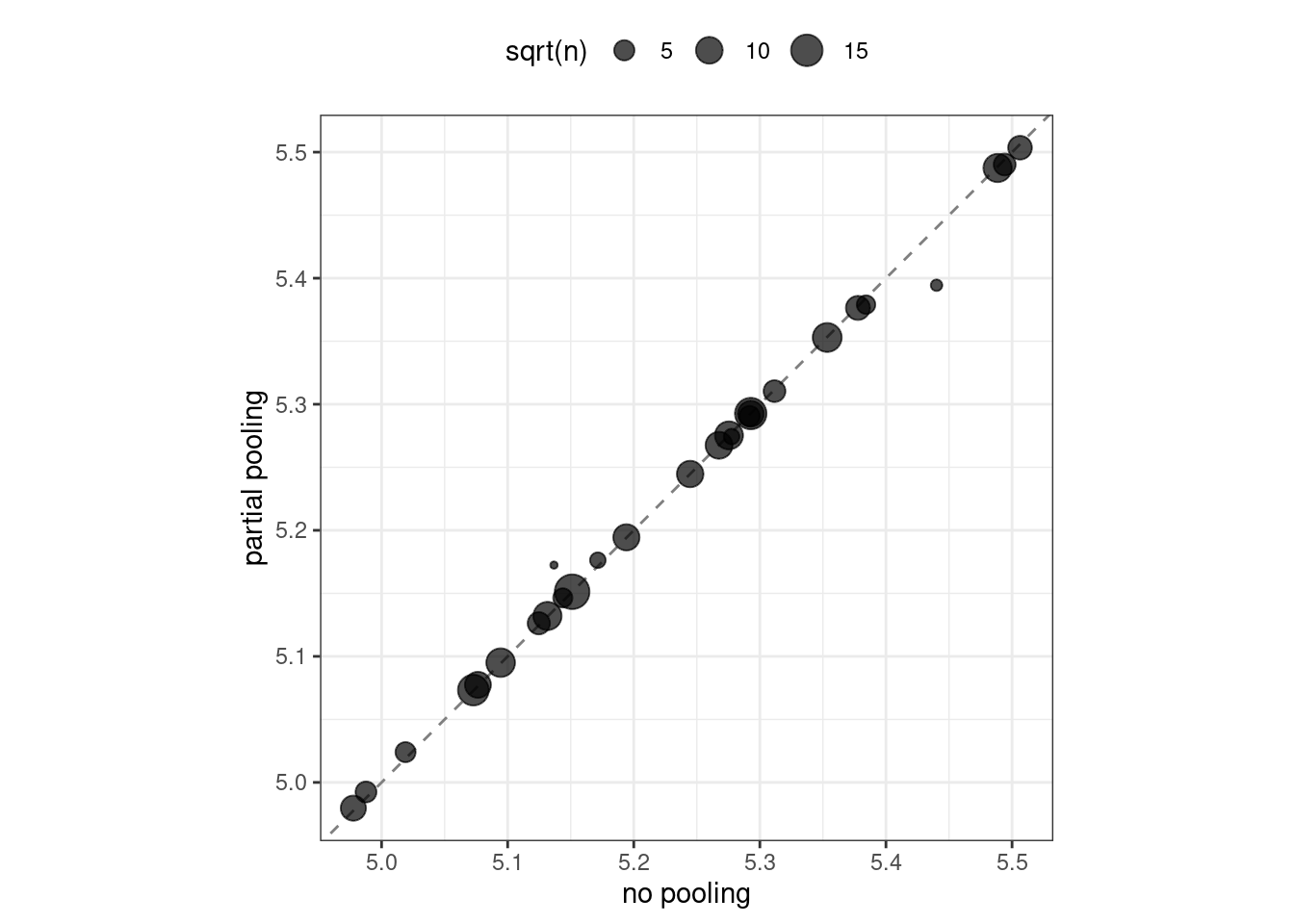 Figure 17.2: Comparing the effect encodings for neighborhood estimated without pooling to those with partial pooling

Traditional dummy variables as described in Section 8.4.1 require that all of the possible categories be known to create a full set of numeric features. Feature hashing methods (Weinberger et al. 2009) also create dummy variables, but only consider the value of the category to assign it to a predefined pool of dummy variables. Let’s look at the Neighborhood values in Ames again and use the rlang::hash() function to understand more:

If we input Briardale to this hashing function, we will always get the same output. The neighborhoods in this case are called the “keys,” while the outputs are the “hashes.”

A hashing function takes an input of variable size and maps it to an output of fixed size. Hashing functions are commonly used in cryptography and databases.

Now instead of the 28 neighborhoods in our original data or an incredibly huge number of the original hashes, we have sixteen hash values. This method is very fast and memory efficient, and it can be a good strategy when there are a large number of possible categories.

Feature hashing is useful for text data as well as high cardinality categorical data. See Section 6.7 of Hvitfeldt and Silge (2021) for a case study demonstration with text predictors.

We can implement feature hashing using a tidymodels recipe step from the textrecipes package:

Feature hashing is fast and efficient but has a few downsides. For example, different category values often map to the same hash value. This is called a collision or aliasing. How often did this happen with our neighborhoods in Ames? Table 17.3 presents the distribution of number of neighborhoods per hash value.

The number of neighborhoods mapped to each hash value varies between zero and four. All of the hash values greater than one are examples of hash collisions.

What are some things to consider when using feature hashing?

It is likely that some hash columns will contain all zeros, as we see in this example. We recommend a zero-variance filter via step_zv() to filter out such columns.

Even more options are available for transforming factors to a numeric representation.

We can build a full set of entity embeddings (Guo and Berkhahn 2016) to transform a categorical variable with many levels to a set of lower-dimensional vectors. This approach is best suited to a nominal variable with many category levels, many more than the example we’ve used with neighborhoods in Ames.

Embeddings for a categorical variable can be learned via a TensorFlow neural network with the step_embed() function in embed. We can use the outcome alone or optionally the outcome plus a set of additional predictors. Like in feature hashing, the number of new encoding columns to create is a hyperparameter of the feature engineering. We also must make decisions about the neural network structure (the number of hidden units) and how to fit the neural network (how many epochs to train, how much of the data to use for validation in measuring metrics).

Yet one more option available for dealing with a binary outcome is to transform a set of category levels based on their association with the binary outcome. This weight of evidence (WoE) transformation (Good 1985) uses the logarithm of the “Bayes factor” (the ratio of the posterior odds to the prior odds) and creates a dictionary mapping each category level to a WoE value. WoE encodings can be determined with the step_woe() function in embed.

In this chapter, you learned about using preprocessing recipes for encoding categorical predictors. The most straightforward option for transforming a categorical variable to a numeric representation is to create dummy variables from the levels, but this option does not work well when you have a variable with high cardinality (too many levels) or when you may see novel values at prediction time (new levels). One option in such a situation is to create effect encodings, a supervised encoding method that uses the outcome. Effect encodings can be learned with or without pooling the categories. Another option uses a hashing function to map category levels to a new, smaller set of dummy variables. Feature hashing is fast and has a low-memory footprint. Other options include entity embeddings (learned via a neural network) and weight of evidence transformation.